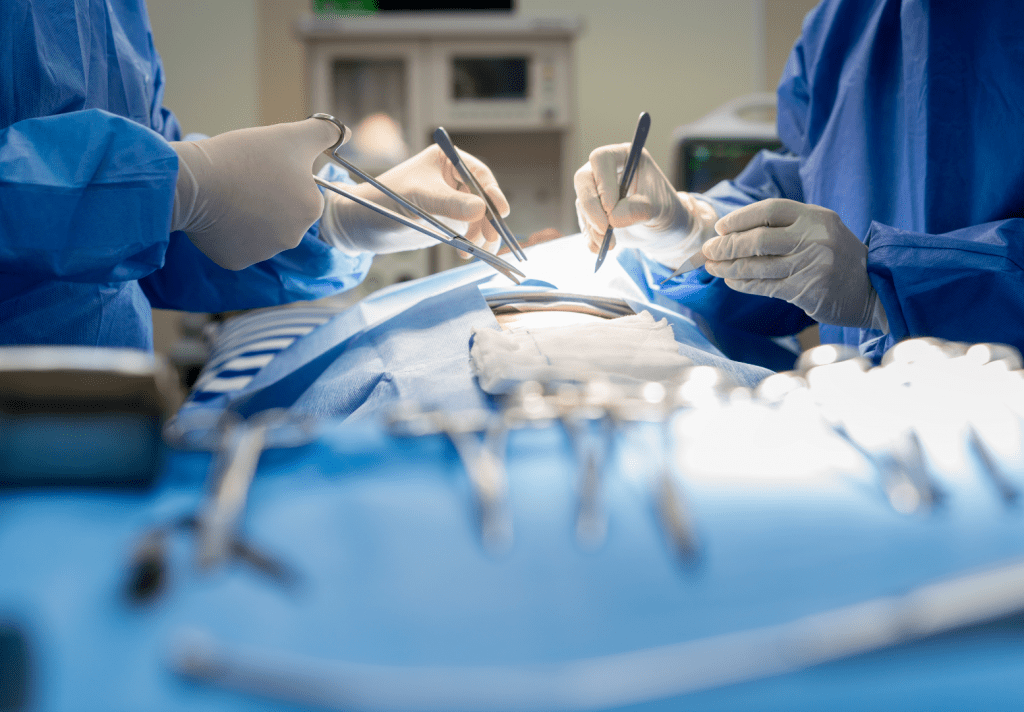 Turbinectomy is a partial or complete resection of the inferior turbinate with or without the guidance of an endoscope. The microdebrider instrument is often used in this procedure in order to remove some of the soft tissue component, and the debrider can be used even in the more complex cases of bony hypertrophy.

Septoplasty is a reconstructive plastic surgery performed to correct an improperly formed nasal septum. The procedure is performed entirely through the nostrils, so that no incisions are visible on the outside skin. During the procedure, badly deviated portions of the septum cartilage and/or bone may be removed partially, entirely, or they may be readjusted and re-placed into the nose.

Also, following septoplasty surgery, patients may be mildly swollen for 1-2 days, but we guarantee that patients are never ‘black and blue’ after this surgery, or have nasal splints or tape strips placed on the outside parts of the nose.

Doctors may also be able to help clear the airway by removing the adenoids, glands found above the roof of the mouth. This surgery is most common in children with OSA, and it often occurs at the same time as tonsil removal.

Tonsillectomy can be a useful treatment for adults who have mild to moderate OSA and enlarged tonsils.

Tonsillectomy is a standard treatment for children with OSA. Sometimes, a tonsillectomy and adenoidectomy are conducted at the same time in children with OSA. Removing tonsils, adenoids, or both can help keep the airway from closing during sleep. If OSA symptoms persist after surgery, removing a child’s lingual tonsils, a second set of tonsils that sit behind the tongue, has been shown to improve symptoms.

Pillar surgery for sleep apnea typically involves the insertion of 3-5 braided polyester implants (pillars) into the soft palate at the back of the mouth. Each implant is 18 mm (3/4 inch) long and is made of a polyester material that has been used in other medical implants for decades.

The Pillar Procedure is usually performed in a surgeon’s office, which is one of its advantages. The most favorable patients tend to be those with small tonsils (or who had them removed already) who are not excessively overweight.

Using a newer surgical technique called radiofrequency surgery, surgeons remove tissue blocking the airway with a high-frequency current. This type of surgery can be used to stiffen and reduce the size of the soft palate.

It can also be used to remove tissue from the nose, tonsils, or tongue base. Radiofrequency surgery generally has fewer side effects and is less painful than other types.

Temperature-controlled radiofrequency tissue ablation (TCRFTA) is performed by submucosally delivering low-power electrical energy with a needle electrode. This procedure has been proposed to improve airway patency with less morbidity than that of traditional surgical approaches to OSA.

The surgery has been used in the tongue base and in the soft palate, and sometimes in both in the same setting. This procedure can be performed in the clinic with local anesthesia. Multiple treatments may accomplish the desired result.

A midline glossectomy, or tongue base reduction, involves removing tissue from the base of the tongue to help open the airway. There are a few surgical methods available for reducing the size of the tongue base. Surgeons may remove tongue tissue using a laser, a tool called a plasma wand, and even with the assistance of a robot. They may also use radiofrequency to remove tissue and firm up the remaining tongue base.

Midline glossectomy improves OSA symptom outcomes when combined with other surgeries, like UPPP, but is not generally recommended on its own. In children who receive lingual tonsillectomies for OSA, tongue base reduction may be done during the same procedure.

The hyoid bone sits toward the top of the neck and connects to the tongue muscles. Hyoid suspension surgery involves moving this bone, which then moves the tongue and helps open the airway.

More recently, researchers have suggested hyoid suspension surgery could be useful when paired with other OSA surgeries, such as tonsillectomy.

Maxillomandibular advancement surgery (MMA) can be an effective treatment for obstructive sleep apnea (OSA). In MMA, the bones of the upper and lower jaw are repositioned to relieve airway obstruction. The procedure also suspends the attached pharyngeal airway muscles in an anterior position and simultaneously increases pharyngeal soft tissue tension.

Genioglossus advancement takes advantage of the fact that the tongue is mainly muscle, with the largest being the genioglossus muscle that attaches over a relatively small area on the inside of the lower jaw. This surgery for sleep apnea involves cutting the portion of the lower jaw where the muscle attaches and pulling the small piece of bone forward to bring the anchor point of the tongue forward. This creates more room for the tongue to relax during sleep without blocking breathing.

A tracheotomy involves creating a hole in the neck, so air can enter directly into the windpipe through a tube. This is the most effective OSA surgery, but it is also the most invasive. Experts recommend only using tracheotomy when a person’s life is at risk and all other options have been exhausted.

Servicing Texas residents only at this time.